by Fred Barlow
Copied with permission from Profiles in Evangelism, ©1976* 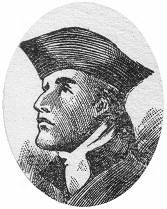 By almost every standard known to modern missionary boards, David Brainerd would have been rejected as a missionary candidate. He was tubercular — died of that disease at twenty-nine — and from his youth was frail and sickly. He never finished college, being expelled from Yale for criticizing a professor and for his interest and attendance in meetings of the "New Lights," a religious organization. He was prone to be melancholy and despondent.

Yet this young man, who would have been considered a real risk by any present-day mission board, became a missionary to the American Indians and, in the most real sense, "the pioneer of modern missionary work." Brainerd began his ministry with the Indians in April, 1743, at Kannameek, New York, then ministered in Crossweeksung and Cranberry (near Newark), New Jersey. These were the areas of his greatest successes.

Brainerd's first journey to the Forks of the Delaware to reach that ferocious tribe resulted in a miracle of God that preserved his life and revered him among the Indians as a "Prophet of God." Encamped at the outskirts of the Indian settlement, Brainerd planned to enter the Indian community the next morning to preach to them the Gospel of Christ. Unknown to him, his every move was being watched by warriors who had been sent out to kill him. F.W. Boreham recorded the incident:

But when the braves drew closer to Brainerd's tent, they saw the paleface on his knees. And as he prayed, suddenly a rattlesnake slipped to his side, lifted up its ugly head to strike, flicked its forked tongue almost in his face, and then without any apparent reason, glided swiftly away into the brushwood. "The Great Spirit is with the paleface!" the Indians said; and thus they accorded him a prophet's welcome.

That incident in Brainerd's ministry illustrates more than the many Divine interventions of God in his life — it also illustrates the importance and intensity of prayer in Brainerd's life. Believe it — Brainerd prayed! Read the Life and Diary of David Brainerd. On page after page one reads such sentences as:

Wednesday, April 21 ...and God again enabled me to wrestle for numbers of souls, and had much fervency in the sweet duty of intercession...

Lord's Day, April 25. This morning I spent about two hours in secret duties and was enabled more than ordinarily to agonize for immortal souls. Though it was early in the morning and the sun scarcely shined at all, yet my body was quite wet with sweat...

Saturday, December 15. Spent much time in prayer in the woods and seemed raised above the things of this world...

Monday, March 14 ...in the morning was almost continually engaged in ejaculatory prayer...

Thursday, August 4. Was enabled to pray much, through the whole day...

Thursday, November 3. Spent this day in secret fasting, and prayer, from morning till night...

Suffice it to say, it is not surprising to read then of the miraculous interventions of God on Brainerd's behalf, and of the mighty ministry and the unbelievable revivals he experienced among the iniquitous, idolatrous Indians in those short years. A volume such as this prohibits more than only mere mention of some of those supernal, supernatural scenes: "I have now baptized, in all, forty-seven persons of the Indians. Twenty-three adults and twenty-four children...Through rich grace, none of them as yet have been left to disgrace their profession of Christianity by any scandalous or unbelieving behavior" (Nov.. 20, 1743). What pastor or evangelist reading this can say the same?

Lord's Day, December 29 ...After public worship was over, I went to my house, proposing to preach again after a short season of intermission. But they soon came in one after another; with tears in their eyes, to know, "what they should do to be saved..." It was an amazing season of power among them, and seemed as if God had "bowed the heavens and come down..." and that God was about to convert the whole world.

His Diary and Journal are a brim with ministries and miracles that were akin to the acts of the Apostles. The Life and Diary of David Brainerd ought to be read — and read often — by God's people. It will do something for you spiritually. You will be convicted, challenged, changed, charged. It has had life-transforming effect upon many, motivating them to become missionaries, evangelists, preachers, people of prayer and power with God.

Brainerd died in 1747 in the home of Jonathan Edwards. His ministry to the Indians was contemporary with Wesley, Whitefield and Edwards as they ministered to the English-speaking people during the period called in English and American history, the "Great Awakening." Brainerd's centuries-spanning influence for revival is positive proof God can and will use any vessel, no matter how fragile and frail, if it is only sold out to souls and the Saviour!

*Copied with permission for WholesomeWords.org from Profiles in Evangelism by Fred Barlow, Sword of the Lord Publishers, ©1976.