children of the Bible
Isaac and Ishmael

Far away in the East is a country formerly called Canaan, and near to it is another, still known as Arabia. At the part where these two lands join is a long and wide desert. Only a few trees and shrubs grow in this barren spot. There are no flowing rivers or broad streams of water. In some places a little stream slowly moves along in winter, but it dries up in summer. The heat of the sun burns up nearly all the grass; yet there are a few places where water and pasture are found. To these spots the shepherds of that region bring large flocks of sheep and goats, which quietly feed around the dark looking tents.

Nearly four thousand years ago, a good man named Abram, lived in this part of the world. He was rich, though his riches did not consist in houses and lands, or in gold and jewels, but in sheep and cattle. His house was a tent. This was the best kind of dwelling for him as he often made long journeys with his flocks from place to place. He could easily take down his tent, and put it up again as he went about the country.

Abram, or Abraham as he was afterwards called, was not born in Canaan; God brought him from his own land to live there. Abraham trusted God and the Bible tells us that "he was called the Friend of God." God promised him that from his family or race the Saviour was to come. This was the great promise of God, and through it the greatest of all blessings was to be given to sinful man. It is said in the New Testament that Abraham saw, or foresaw, the day of Jesus, and was glad. He was glad there was a Saviour for his own soul, who would be a Saviour for all those who would believe in Him, in every age.

Abraham had two sons; one named Ishmael, and the other Isaac. Though these brothers had the same father, they did not have the same mother; Ishmael was the son of Hagar, and Isaac the son of Sarah. As Ishmael was much older than his little brother, he ought to have been kind to him, and set a good example. But he did not love him and was so full of spite that he mocked his brother Isaac. Perhaps he called him ill names, because he knew it had been promised to his father that he should be the father of a great nation.

Grieved by the bad conduct of his eldest son, and at the urging of his wife Sarah, Abraham sent the boy and his mother Hagar away. We do not know that he would have done so if God had not told him that He would take care of them, and also make this son the forefather of numerous tribes of people.

It was early in the morning when Ishmael and his mother were sent away from the tent of Abraham. A leathern bottle of water and some bread were given to them. They must have felt very sorry when they left such a good home as they had long enjoyed. The grief of Ishmael must have been the greater, as he knew it was his bad conduct which had led to their being sent away.

The outcast mother and her boy went toward the desert. As she was a native of Egypt she may have thought she could reach that country, and live among her own people. She had not traveled many miles before she came to a wild part of the country. What could she now do? She had lost her way, and went up and down the desert, and could find no one to guide her. In that part of the world there were no roads or paths, and the way was rough and painful, and the heat great.

At last they had drunk all the water from the bottle, and they could see no well or river from which they could again fill it. Ishmael was now weary with walking, and faint from thirst and the heat of the sun. He could not go on any farther. How sad was the state of the poor mother and her boy! In her distress, she cried, "Let me not see the death of the child." So she laid him under a shrub, and "sat down over against him, a good way off." She could not help him, but would not leave him to perish alone. Ishmael must now have known how foolish and wicked his conduct had been. He knew that he had brought himself and his mother into all this affliction, and he must have wished that they were once again in Abraham's tent. Sin will always bring us into trouble.

As the lad lay weeping and moaning, a voice was heard by Hagar. Where could it 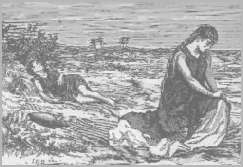 have come from? Could she be mistaken in the sound? No; in the stillness of the solitude an angel spoke to Hagar. He had been sent by God to comfort her in her distress.

"Fear not," said he; "for God hath heard the voice of the lad where he is."

And "God opened her eyes," so that she saw a well not far off from where she sat. With new strength she rose from the ground, and with joy took her bottle to the well. Do not we think we see her, as soon as it is filled, hastening to her son, and before she tastes a drop herself, pressing it to his lips? See how she bathes his forehead with some of the cooling water, and, as she finds him revive, how gently she raises him in her arms and kisses him! When they were revived, they again filled their bottle for their journey, and went on their way. From that time "God was with the lad; and he grew, and dwelt in the wilderness, and became an archer.";

There is no further account of the early days of Isaac and Ishmael in the Bible. But there are lessons to be learned from this account of these two brothers:

1. God can see us in every place. "For the ways of man are before the eyes of the LORD, and He pondereth all his goings." Proverbs 5:21. His eye is as much upon us in a desert as when we are sitting by our own fireside. Also, when we are brought into trouble by our own folly and sin, we may still pray to God. Wherever we are, as we cry out to the Lord, His ear will listen to our prayers, and His hand is ready to afford His gracious help. "Call upon Me in the day of trouble: I will deliver thee, and thou shalt glorify Me." Psalm 50:15.

2. God is displeased with those children who vex and mock their brothers and sisters. If there be an ill behaved child in a family, he makes others unhappy besides himself. We should all try to live together in love and peace; and elder children should set a good example for the younger. The way for a family to be happy is to love God, obey His Word and be kind one to another. The servant of the Lord should not strive nor speak evil of others, but whether young or old we should be kind to and love one another. "Let all bitterness, and wrath, and anger, and clamour, and evil speaking, be put away from you, with all malice: And be ye kind one to another, tenderhearted, forgiving one another, even as God for Christ's sake hath forgiven you." Ephesians 4:31-32.

When Isaac grew up to be quite a tall, strong youth, a very strange and wonderful thing happened to him. God came and spoke to Abraham, his father, and told him to take Isaac and go on a three day journey to a mountain, and there on the top to offer Isaac as a sacrifice.

You remember how much Abraham loved Isaac. He loved him more than words can tell. But Abraham loved God even more than he did his own son Isaac. Abraham was very sad, and could not make out what God meant by bidding him to do such a dreadful deed. But God had told him to do it, and that was enough for Abraham for his trust was in God. He knew that whatever God told him to do must be right.

The Bible tells us the story of what took place in very lovely and simple words.

"And Abraham rose up early in the morning, and saddled his ass, and took two of his young men with him, and Isaac his son, and clave the wood for the burnt offering, and rose up, and went unto the place God had told him. Then on the third day Abraham lifted up his eyes, and saw the place afar off.

"And Abraham said unto his young men, Abide ye here with the ass; and I and the lad will go yonder and worship, and come again to you. 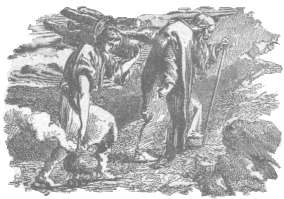 And Abraham took the wood of the burnt offering, and laid it upon Isaac his son; and he took the fire in his hand, and a knife; and they went both of them together.

"And they came to the place which God had told him of; and Abraham built an altar there, and laid the wood in order, and bound Isaac his son, and laid him on the altar upon the wood. And Abraham stretched forth his hand, and took the knife to slay his son. And the angel of the LORD called unto him of heaven, and said, Abraham, Abraham: and he said, Here am I. And he said, Lay not thine hand upon the lad, neither do thou any thing unto him: for now I know that thou fearest God, seeing thou hast not withheld thy son, thine only son from Me. And Abraham lifted up his eyes, and looked, and behold behind him a ram caught in a thicket by his horns: and Abraham went and took the ram, and offered him up for a burnt offering in the stead of his son." Genesis 22:1-14.

In old days, when anything wonderful took place, men named the spot in such a way as to tell what had been done there. So Abraham, glad and joyful as he was, called the name of the place where God had tried him, and found that at His command he was willing to give up even his dear son Isaac, Jehovah-jireh. These Hebrew words mean, the Lord will see, or will provide.

On the spot where Abraham built his altar and was about to kill Isaac, hundreds of years later the great and beautiful temple, was built: first by Solomon, then by Zerubbabel, and last of all rebuilt by wicked King Herod. Not far from that temple, Jesus on Mount Calvary was offered as the one great sacrifice for the sins of the whole world. You remember the hymn—

On a hill far away stood an old rugged cross,
The emblem of suffering and shame;
And I love that old cross where the dearest and best
For a world of lost sinners was slain.

The Lord Jesus obeyed His Father's will and was "obedient unto death, even the death of the cross." And Isaac, as we just read, was obedient to his father, Abraham. So children today should obey God's Word and be obedient to their parents: "Children, obey your parents in the Lord: for this is right." Ephesians 6:1.